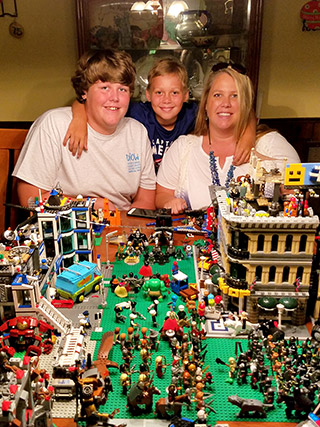 OXFORD, Miss. – Putting together 1,000-piece Lego displays is a regular occurrence at the home of Christie Rogers. Her dining room table is home to Harry Potter’s Hogwarts, an entire cityscape with three-story buildings, a police station, Avengers characters and Scooby-Doo’s Mystery Machine.

“The feeling of accomplishment you get when you’ve struggled, tried every possible solution and finally get the right fit; that’s why I love building projects with Legos,” Rogers said.

Rogers began working a different type of puzzle this month as she steps into her new role as an academic counselor for the University of Mississippi’s Bachelor of General Studies program.

“I’m excited to help students put together the pieces of their academic journey,” Rogers said. “I hope I can help them set goals and make plans for their future.

“I want to encourage them to look at what’s working for them academically and what might not be. I hope to talk through the challenges and set them up for success.”

Originally from Martin, Tennessee, Rogers completed her bachelor’s degree in psychology at the University of Tennessee at Martin, and went on to complete her master’s degree in community counseling there in 1997.

In 1994 she began her first job in the higher education field with the office of UT-Martin’s associate vice chancellor for student affairs and affirmative action. There, Rogers was able to advise students and also work with university entities to make sure programs and classes were compliant to American Disability Act standards.

In 1998, she and her husband, Don Rogers, moved to Cape Girardeau, Missouri, and both began working for Southeast Missouri State University. She became the academic coordinator at the Sikeston Area Higher Education Center, a partnership between Southeast and Three Rivers Community College.

“Working at the Sikeston Center was a great learning experience,” Rogers said. “It was my job to look out for our students and help them navigate transfer credits so they were on the path to graduate.”

In July 2001, the couple moved to Oxford when Don accepted a position as a residence hall area coordinator with Ole Miss.

“We lived in an apartment in Garland Hall,” Rogers recalled. “I brought our first-born son, Donald, home to that dorm in May 2002. So, I guess he has literally been an Ole Miss kid his whole life.”

The family later moved to faculty housing at Northgate Hall when their second child, Currie, was born in 2004.

“Some of the college kids would stop by when we were outside and play with the boys,” Rogers said. “One time a student brought us a big box of Legos he didn’t want anymore, and that is when our new hobby began.”

Rogers said that for Christmas and birthdays, her two children begged for new Lego sets.

“The more we built, the more we enjoyed it, so we kept going,” Rogers said. “I would love to be a Lego master builder one day.”

From 2007 to 2012, Rogers worked as a 4-year-old preschool teacher at Oxford-University Methodist Church. She then transitioned to a teaching assistant and office staff member at Bramlett Elementary within the Oxford School District.

“I really enjoyed my time teaching fundamentals to the younger children because those early building blocks are so important,” Rogers said. “But I also enjoy working with college students who are nearing the end of their formal education and need just a little guidance to put all of their hard work into a career plan.”

Within just a few weeks of Rogers starting, her impact on students was apparent, said Terry Blackmarr, the BGS program’s assistant to the dean.

“Within the first week, we received an email from a student thanking Christie for helping her,” Blackmarr said. “The student was so grateful. She just helped calm the student and take her nervousness away.”

Rogers said that when she saw the position open within the BGS program, she thought it seemed like a very interesting degree with potential for great student success stories.

“I liked that this degree was not a cookie-cutter program,” she said. “It made room for individuality. I have seen people making some really creative choices in order to gain the knowledge they need to do something special with their career.

“I’ve also seen folks who have taken a winding path in their career, and this degree can help get them where they ultimately want to be. Paths in your life can be a puzzle sometime, I hope I can be of assistance to our BGS students and really incorporate their goals and navigate their career journey.”

Rogers’ experience in advising and counseling has reinforced her love for students and academic advising, Blackmarr said.

“She develops an instant rapport with everyone she meets,” she said.

Rogers will continue getting to know UM students this fall as she advises some of the 350 BGS majors on the Oxford campus.

“Priorities do change, and people change their minds about their career,” Rogers said. “A degree like this is perfect for today’s generation who want to be individuals and want to choose their own path.

“There are a lot of pieces out there, and I want to help them put together the right ones their own personal and academic success.”

The BGS academic program is found within UM’s Division of Outreach and Continuing Education. For more information, visit https://www.olemiss.edu/generalstudies.